Worst in the World: Steve McMichael vs Brian Adams-Road Wild 1998 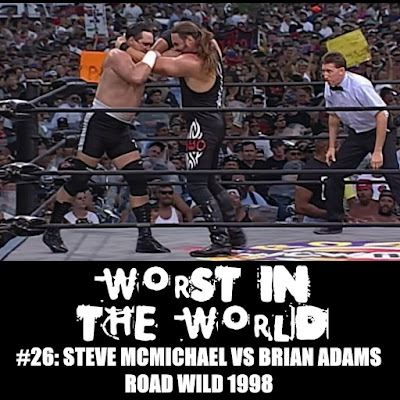 Just to clarify, that is NOT Brian Adams the singer, but that would be really funny to see that guy get in the ring with...anyone. Nope, this Brian Adams is better known as Crush, aka the guy who replaced Ax in Demolition, and as Kona Crush, who had a feud with Doink the Clown because Doink was, to quote OSW Review, "MAKING KIDS CRY, BRAH". And to make this even better he is going up against STEVE MCMICHAEL, aka MONGO. If you don't know, Mongo was a former football player, and went to become one of the most hilariously bad wrestling commentators ever. Like, so bad. He eventually became a wrestler and a member of the Four Horsemen, despite not being a good wrestler. Mongo faced Brian Adams at Road Wild 1998. You remember Road Wild, right? The WCW pay-per-view at the Sturgis Motorcycle Rally where they could bring in money at the gate. This is just a beautiful mess of bad idea after bad idea. But let's get to the actual match.
The two lock up, Mongo backs Adams into the corner, and breaks the hold before the five, which Mongo proudly yells "THAT'S HOW A GOOD GUY DOES IT!" Never change, Mongo, never change. The two lock up again and Adams gets Mongo in the corner. Instead of counting, the referee opts to squeeze in between the two: 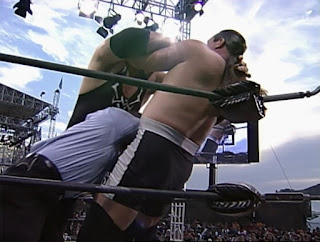 So bizarre. Adams breaks the hold. Also, funny moment; Adam's was accompanied to the ring by Vincent (aka Virgil) and he was leaning on the ropes, so the referee gave him a little kick to get him off. I laughed.
Adams takes control with a kick, a punch, and a headbutt. He whips Mongo into the ropes, and this is where you start to question how this guy got into the wrestling business at all. He fails to duck a clothesline, so Adams has to aim about two feet over Mongo's head, and then stutters and hits the worst shoulder tackle in history. Mongo hits the worst & least impactful DDT ever, and Adams rolls out of the ring. The commentators bury Vincent by saying he can't provide any help for Adams because, essentially, he sucks. Adams gets back in, and Mongo takes control with punches. Mongo goes for a big boot, but Adams catches and slams him. Adams puts him in a shoulder claw, and clotheslines Mongo out of the ring. Vincent starts beating up Mongo, which he no sells, before Adams goes after him.
Adams hits a back breaker and holds Mongo over his knee like a submission for a while, but oddly drops him for a pin. Adams misses a knee drop from the middle rope (the most dangerous rope, of course), and Mongo runs wild. After flooring Mongo with a short armed clothesline (and by "floored" I mean he got hit, and fell about two seconds late), Adams goes for a piledriver, but Mongo's foot grazes the referee and now the referee is down. Like, Mongo's toes barely touch him, and he crumples down in a heap. Adams gives the ref a kick.
Vincent grabs a chair, but Mongo avoids the shot and Adams gets hit. Mongo punches the chair into Vincent, and hits a Mongo Spike for the win. The babyface wins, thanks to miscommunication and a ref bump, which basically does nothing but make him look like he needs to cheat to win.

Whatever, it was pretty boring match. Mongo botches a lot, he really should never have been in a wrestling ring, and the match was just slow and plodding.

Oh boy, this one might break me. Can't I catch a break. If this match were a movie, it would be Point Break...
This is the one where Sid breaks his leg.
Thanks for reading. Be sure to share if you enjoyed,

More from The Wrestling Section

By CJ Biddle March 05, 2022
(Special thanks to Frost for suggesting this match. If you'd like to see a match covered on the Worst in the World, leave a comment down below.) WrestleMania X-Seven. Heavily considered the not just the best WrestleMania, but the greatest wrestling show of all time, WrestleMania X-Seven took place during the hottest period in the WWF's history, and features just about every one of the hottest acts in wrestling at the time. An undercard featuring the likes of Chris Jericho, Kurt Angle, Chris Benoit, Eddie Guerrero, William Regal, Kane, and the Big Show. One of the biggest female stars in the history of wrestling in Chyna. A killer TLC match between the Dudley Boyz, the Hardy Boyz, and Edge & Christian. A wild brawl between The Undertaker and Triple H. A massive main event between Stone Cold Steve Austin and The Rock. Hell, even the father vs son Street Fight between Vince & Shane McMahon. It's a star-studded affair. However, there's one match that sticks out like
2 comments
Read more

Worst in the World: Rebel vs Shelly Martinez-One Night Only: Knockouts Knockdown

By CJ Biddle April 05, 2017
I did say I was coming back to this. Long time readers of the Wrestling Section will hopefully remember the Worst in the World , my first really series where I went through 99 of the worst matches in wrestling history and ranked them one by one. I wrapped up that series in October but always had the intention of coming back to it, since there are always going to be terrible matches in the future. And with the Wrestling Observer releasing their yearly awards, I thought it was the perfect time to look at the match that won the worst match of 2016. So here it is; Rebel vs Shelly Martinez from Knockouts Knockdown. So let me explain what Knockouts Knockdown is first. It was one of TNA's dumb One Night Only shows that they tape before they air and nothing important happens on them. Sometimes they give someone a meaningless prize, but that's not really anything. This show has 8 TNA Knockouts facing off against 8 other female wrestlers for spots in a battle royal, where the winn
Post a Comment
Read more

By CJ Biddle September 07, 2016
A lot of criticism has been thrown lately at how the WWE presented women's wrestling during the Attitude Era. The fact that there was a period where the only way you could get TV time was to take off your clothes and fight in anything from an evening gown match to a lingerie pillow fight to a match where you've got to throw another woman into a pool of stuff did nothing but show that WWE was only interested in using female wrestlers for getting cheap tits & ass pops in the ratings. WWE have moved past this, but it's still a pretty bleak part of history looking back nowadays. That being said, it doesn't even compare to the women in WCW. With not even a title to fight for whatsoever, women in WCW were used solely as eye candy and nothing else. And today, I look at one of those matches. It's Miss Hancock, aka Stacy Keibler, against Major Gunns, aka adult film star Tylene Buck. Searchy searchy. It's a woman named after a dick joke against a woman named afte
Post a Comment
Read more

Worst in the World: D-Generation X vs Brothers of Destruction-Crown Jewel

By CJ Biddle April 29, 2019
This match didn't need to happen. After Triple H and the Undertaker had one of the most brutally bad matches of 2018 at Super Show-Down not even a month earlier, nobody wanted to see them try to wrestle again. Also, nobody wanted to see Shawn Michaels come out of retirement after his fantastic sendoff in 2010, especially for a match like this. But here we are, Triple H & Shawn Michaels facing The Undertaker & Kane in 2018. The combined ages of these four at the time is 206. That's a number you'd expect to see from a match at Heroes of Wrestling. And anyone can come up with their own reason as to why this match is happening, but that would just be ignoring the actual reason. For those of you who don't know, Crown Jewel was held in Riyadh, Saudi Arabia. That might not seem like important information, but you can't really discuss this match without mentioning it. Despite the numerous reasons that running shows in Saudi Arabia is morally wrong (their abuse
5 comments
Read more

Worst in the World: What is the Worst Wrestling Match of All Time?

By CJ Biddle January 07, 2016
Note: This series is based off a YouTube series " The Search for the Worst " by I Hate Everything, where he reviews every movie on IMDB's Bottom 100. It's a great, funny series and I'd recommend checking it out. Have you ever just thought to yourself "What is the worst match of all time?"? I don't mean something like a boring John Cena-Randy Orton match, I mean a match where the wrestlers have zero chemistry, little wrestling ability, or literally no idea what they are actually doing. I've thought about this for a while, and I've decided to finally figure it out. So I'm going to watch any match that is: a) A winner of the Wrestling Observer Newsletter Award for the Worst Worked Match of the Year. or:  b) Listed on the 100 worst rated wrestling matches of all time on the Internet Wrestling Database .   (Note: Some matches appear on awards that aren't on the list.) There are 115 (EDIT: Now 99)  matches on here. I pu
Post a Comment
Read more